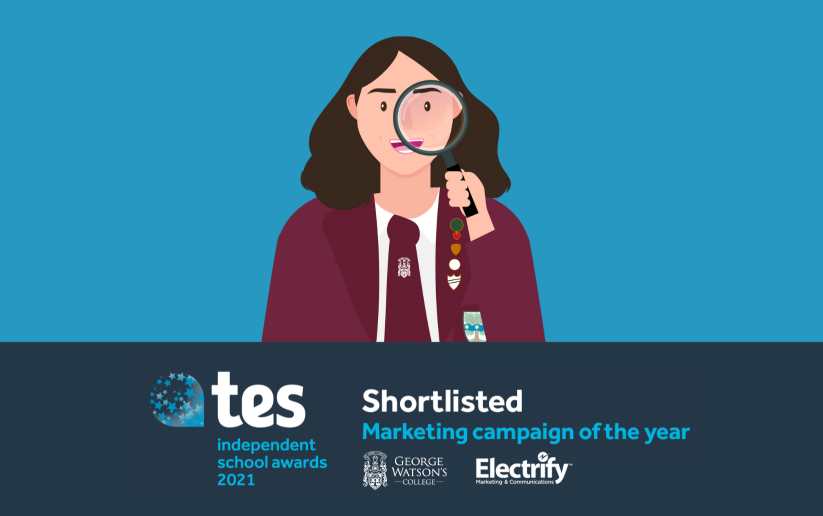 We're really pleased to have learnt that our collaboration with George Watson's College on its 2021-22 pupil recruitment campaign has been shortlisted for a national award.

"Freedom to" was an animated campaign based on the story of former school captain Phoebe Fogarty. It was created at the height of the first lockdown during the pandemic, when pupils were learning from home.

Pragmatism necessitated a different approach, and although we'd have always preferred real-life children and young people to feature, we had to shake things up.

The good news is that the animated campaign, based on a series of beautifully illustrated scenes featuring Phoebe painted a bright picture of life in maroon at the independent Edinburgh school.

It was supported with a paid and organic social media campaign. A new blog, "Why Watson's" was also introduced to provide real insight to families considering the school for their children.

Punchy in style, it looked at a range of issues from mental health and wellbeing, science, the curriculum in Senior 1 and 2, music, sport and much more. Themes were identified based on research conducted with families either choosing - or not choosing - Watson's.

The most ambitious live, digital open morning in Scotland was created with 69 different live events, a concept that Electrify developed. Over 21,000 minutes of live 'action' was watched on the day, with over 400 registering to participate!

Such was the precision of our model, we were able to identify the cost of every application to the school for the academic session starting August 2021.

And with over two places applied for, for every available place, Watson's can go forward with confidence into the new year, knowing they will have a full school roll again. That's not something every independent school can report at this time.

The TES Independent School Awards, are run by the UK's biggest education media outlet, TES (Times Educational Supplement). Watson's will go up against six other shortlisted schools at the digital awards ceremony on Friday 30 April 2021.

Melvyn Roffe, principal at Watson's said: "We have very much enjoyed working with Electrify in driving our marketing strategy forward. Their approach is always creative, and their rigorous understanding of the brief and the school generally has been a great strength in making a success of our project."

Our managing director Lawrence Broadie hailed the campaign for the way it was co-produced with Phoebe, with such a strong focus on storytelling.

"From the moment I first saw the animation when it came out of our studio I thought we had something very special. It's very different to what schools normally produce, but we felt it really well reflected Watson's four values - aim high, be kind, respect all and join in.

"In many ways, Phoebe's story reflected the best of Watson's, and so it was a privilege to bring it to life in such a different way. When we showed it to her she told us, 'that's Watson's in a nutshell' which is a sign that we've really understood the story we are trying to tell.

"It has been an absolute pleasure to again work with Watson's, and its brilliant communications and marketing and admissions teams. They've embraced our approach, encouraged us throughout, and been brilliant advocates for something that was very different for people to get used to."

Lauren Bennett, our head of creative services, created the animation and the many scenes which were used across the three month campaign.

"It was fantastic to work on this campaign. Watson's talks about giving pupils, 'the freedom to discover who they really are' and I suppose in many ways I was given that same space and trust to build the campaign in animated form.

"There are so many ways to tell different stories, and it's that variety that I love at Electrify. But more rewarding than that is when you know that a campaign you have been involved in has helped deliver a brilliant outcome.

"Here's hoping we can be celebrating on Friday 30 April!"

Electrify is a creative marketing & communications agency that works with clients who share our values, to tell extraordinary, powerful stories that inspire action.

Some of our other clients include: Age Scotland, Alzheimer Scotland, Blue Triangle, Impact Funding Partners, Registers of Scotland, Royal Caledonian Education Trust, SPFL Trust and Electric Umbrella. Find out how we can help you - email go@electrify.me.uk.