It's one of the UK's biggest programmes, with over three million viewers every night, and so when The One Show came to the Isle of Lewis & Harris it's fair to say it was an electrifying experience for all concerned.

As part of our work with Scotland's Gaelic Media Service, MG ALBA, we supported the team in promoting the unique partnership which brought the flagship BBC One show to the Western Isles.

Both shows included a full range of features from across the Hebrides, profiling a range of stories about the people and culture of this part of Scotland.

Electrify filled two roles during the two days. We helped to promote the partnership with MG ALBA, which included over half of the crew provided locally, as well as almost all the required facilities.

And we supported the team on the ground delivering imaginative content for MG ALBA's corporate content accounts on Twitter and Facebook, supporting a team of students who are part of the organisation's summer intern programme.

There was high praise from the team behind The One Show who lauded quality of people and facilities available across Lewis & Harris as well as a real can-do attitude.

Thursday night's first programme took place in the eye of Niseaboist Beach, a stunning outpost on Harris where the vista wouldn't look out of place in the Caribbean.

Alas the weather was dreadful, which given it was an outside broadcast made things particularly challenging, not least for the presenters who were in the line of the wind and rain throughout. The gazebo cover on the studio stage afforded little protection.

The following evening at Heb Celt things were much calmer weather-wise but less so with an audience of thousands joined in Fairground Attraction's "Perfect" with Eddi Reader sitting on The One Show couch.

Our PR campaign focusing on promoting The One Show coming to Scotland as part of the relationship formed with MG ALBA. This included setting up a photo opportunity with Matt & Alex in London, the pair posing with our "road sign" prop.

And then when they made it to Scotland we used images captured on the first night of the two to send out a follow up story which included praise for the MG ALBA team, and some stunning imagery from Talla Na Mara. 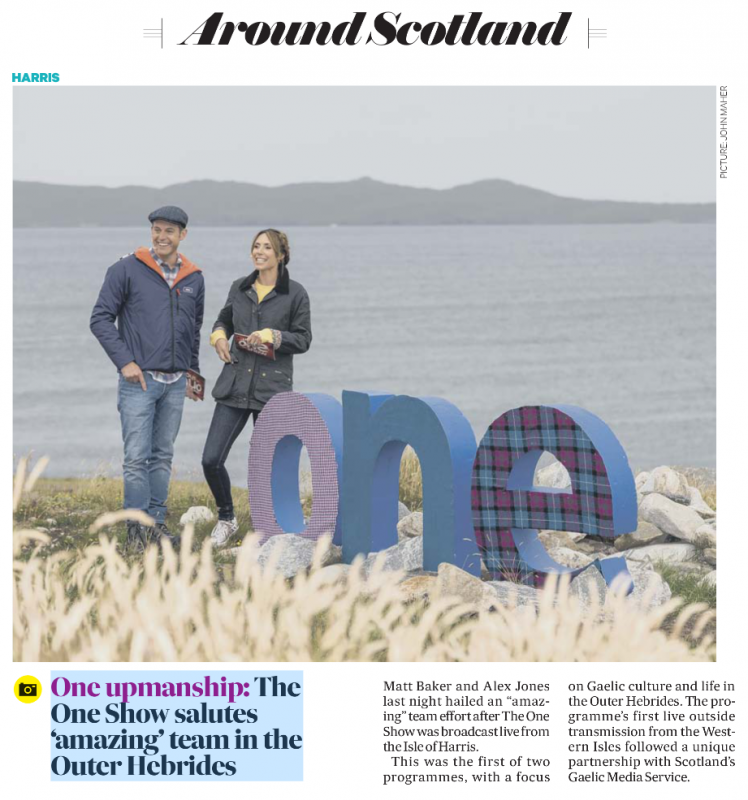 Electrify is an integrated marketing & communications agency based in Scotland. We work with a range of clients who share our values - commitment, energy and honesty.