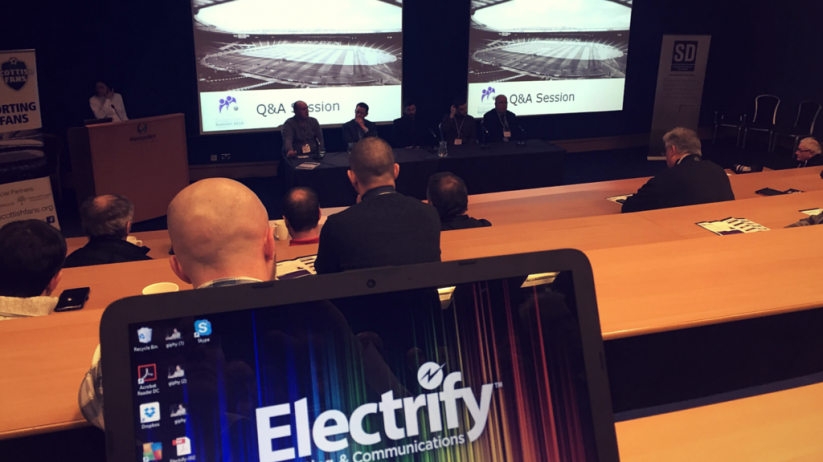 Team Electrify were at today's Supporters Direct Scotland Summit at Hampden Park, during which a range of speakers presented a fascinating look at the key issues around fan involvement in football.

Scottish government minister for sport Jamie Hepburn praised football as, 'overwhelmingly a force for good,' in his scene setting speach.

Head of Supporters Direct Scotland, Andrew Jenkin announced the launch of the Club Development Scotland programme which will provide support for fans and groups who want to own their own club.

And backers of the proposed Community Sports Fund hope the offer of tax breaks for investors would allow access to capital investment via social investors, possibly in a similar matter to Ann Budge at Hearts and Les Hutchison at Motherwell.

Swansea City Trust chair Phil Sumbler spoke at length about the story of the Swans ten year ascent to the Premier League in England, revealing that the Welsh club's top flight success has generated £800,000 of revenue in the form of dividends.

The Trust owns 21% of the club as part of a consortium of investors. It has two directors on the board at The Liberty Stadium.

In a unique situation, the club's owners recognise that the way to keep Swansea in local hands is to pay an annual dividend as long as the business is profitable. Of course dividend' in football is usually a dirty word!

Such a strategy allows the Swansea City Trust to build a cash reserve, and should more difficult times come, enable the Trust to purchase shares in the event of an investment requirement.

The right for the Trust to invest first is established as part of the legal agreement between the club's ownership consortium.

The dividend model also encourages other members of the consortium to retain their shareholding rather than sell out to possible international investors.

There were also fine presentations from author Lee Price on what Scotland can learn from Germany's Bundesliga, and then an impassionate plea from Sean Hamill about the future of fan ownership.

Interestingly Sean also made a suggestion that Supporters Direct Scotland should be split from the UK entity to stand alone within a pan European network, given the current changing political landscape north of the border.

Electrify Marketing & Communications is an integrated agency, primarily offering services across sport, charity and community sectors. Driven by our values, the most important element for us is always people.