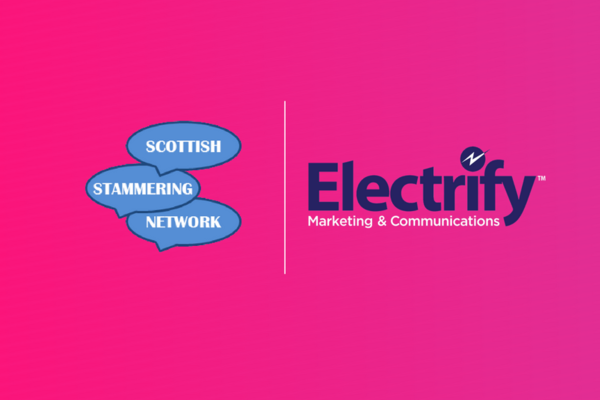 Electrify Marketing & Communications is delighted to reveal it's reached agreement to provide support on a key campaign for the Scottish Stammering Network.

As the only charity in Scotland providing free support to those who stammer, the organisation has a crucial role to support and empower people - as well as raising awareness.

Our work, which starts in June, will look at the impact that stammering - and the attitudes around it - can have on the lives of those that stammer, and their family and friends.

Often misunderstood, we'll be focusing on some of the misconceptions, as we give the stage to those who are affected to tell their story.

"During our preparatory work we've learnt that stammering appears to be one of the final bastions of poor-taste humour in this country, long after jokes about race, ethnicity, gender or sexual orientation were considered inappropriate.

"And yet there's reasonably little research, and sadly limited support available on the NHS. The fact it's not curable isn't widely appreciated.

"That reality can have a debilitating effect on an individual and those around them, so we want to work with the team at the Scottish Stammering Network to create a powerful, challenging campaign which confronts the reality of having a stammer."

Scottish Stammering Network chair James Stewart adds: ""I am delighted we are working with Lawrence and the team at Electrify on this project. They have an excellent track record.

"Stammering can have a devastating impact on an individual but there is little awareness of the condition among the general public.

"This campaign is the start of us changing the perceptions of stammering and helping us reach out to more people who stammer who need the help and support we provide at the Scottish Stammering Network."