We are incredibly proud of our work with the Scottish Stammering Network, having created a campaign called #HearThePerson.

A hard-hitting project, we worked with the charity to show the real affects of stammering.

#HearThePerson, comprises six short films and confronts some of the toughest challenges people who stammer have to face.

Stammering is often treated as a disability people are still allowed to mock, with TV and film often characterising people who stammer in a negative way.

What a moving and powerful video from @stammerscotland#HearThePerson, whether it is in the home, the classroom or even the debating chamber.
u25b6 https://t.co/vQU3z8tl6J

The Scottish Stammering Network - a charity registered in Scotland - gained backing from the Big Lottery Fund to produce the digital campaign. #HearThePerson aims to stand up to the bullies, by giving individuals a voice.

The Scottish Stammering Network is the only organisation in Scotland providing free long-term support to adults who stammer. There is no specific government funding given, and stammering therapy on the NHS is a postcode lottery, being provided by only some health boards.

In the first of the six videos, we meet John Macintosh, an English teacher, who reads an open letter to his late father about the heart-breaking reasons behind the decision not to speak at his funeral. 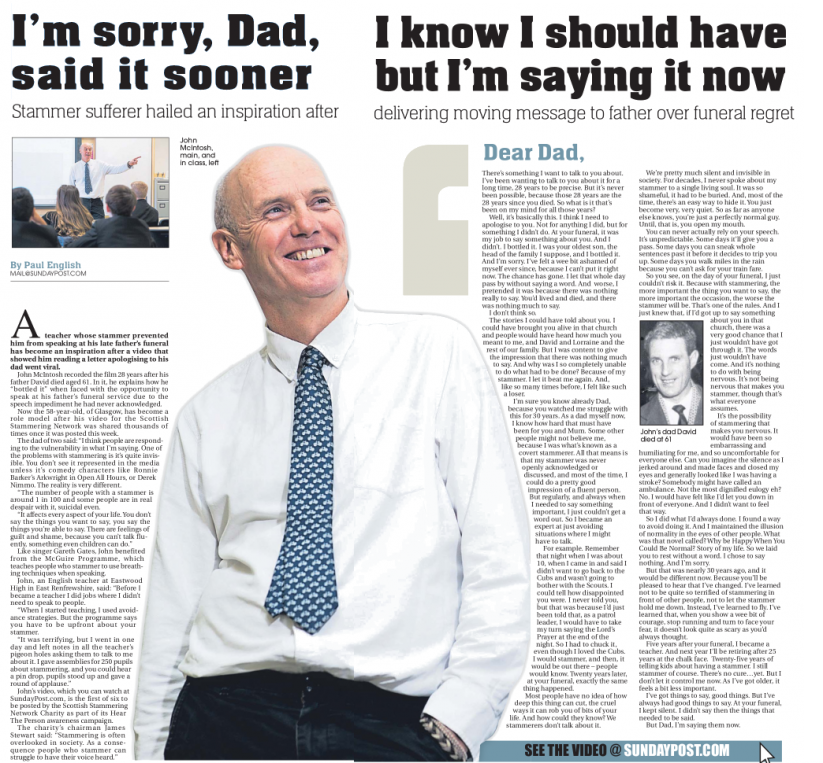 People who stammer can receive abuse on a daily basis. The Scottish Stammering Network reports that many of its group members have faced ridicule at work, at school and particularly online. This can have a significant impact on confidence and self-esteem.

The film has been widely shared by sports stars, politicians and other key bodies.

I let that whole day pass me by without a word, and worse, I pretended it was because there was nothing really to say. Why was I so completely unable to do what had to be done? Because of my stammer. I let it beat me again.

Other videos cover themes including being kicked off a course for having a stammer and the long-term impact of not having support as a child. These are being revealed between now and a major Glasgow event in October.

Around 1% of all adults across the world are affected by stammering, with men being around four times more likely to stammer than women.

ud83cudfa5Check out this powerful video about @EastwoodHighERC teacher John McIntosh, who has opened up about his stammer as part of the Scottish Stammering Network's #HearThePerson awareness campaign – a real inspiration. https://t.co/OGdZe0OA0C

Electrify is an integrated marketing & communications agency, driven by our values - commitment, energy and honesty - who work, primarily with clients across sport, community and the third sector.