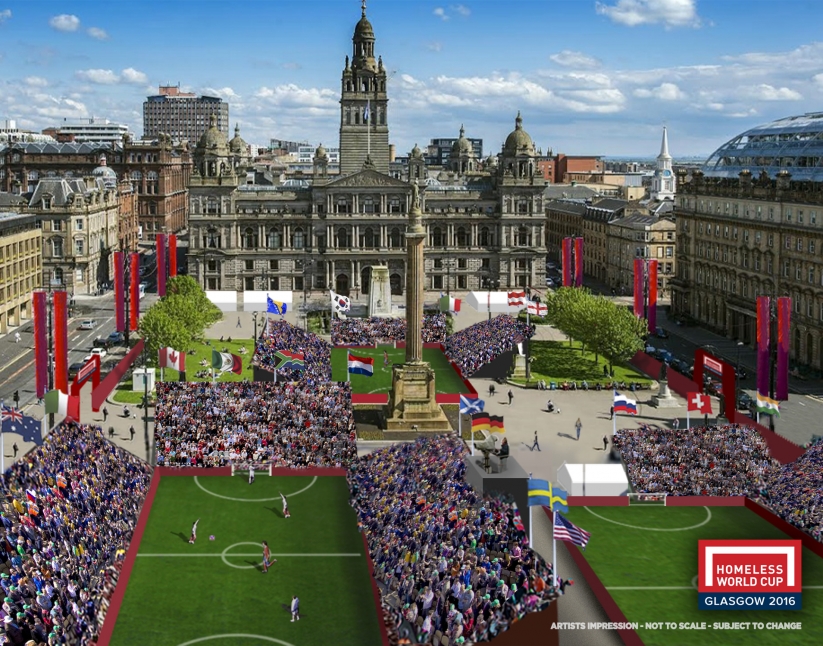 Today we're helping the Homeless World Cup reveal the dramatic transformation of George Square for this summer's tournament (click on the gallery link above to view, full size).

Taking place in the heart of Glasgow from 10-16 July, the heart of the event will be a stunning city centre stadium for around 3,500 spectators.

Around 100,000 are expected to attend the week-long festival.

Electrify Marketing & Communications is the media & PR agency for the Homeless World Cup 2016.

So far we've helped launch Glasgow 2016, with media activity which had a reach of 27 million people (Source: Freuds) and revealed the participating nations by errecting a giant washing line in George Square.

Today's reveal is the latest step along the way, with a full live draw planned, a tour of schools, as well as a number of other key milestone events involving volunteers and referees also planned before the action gets underway.

Driven by our values, our mission is to, 'electrify your audience, by telling an amazing story.' Clients include: DPS Group, purpleTV, the Homeless World Cup, Supporters Direct Scotland, McEwan Fraser Legal, and the Scottish FA.