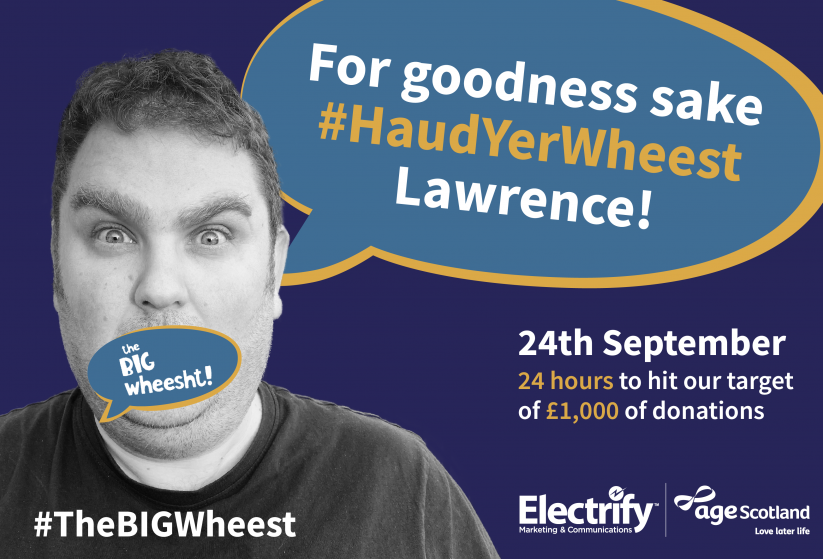 At Electrify we live our values, which include being kind and honest, because they are really important to us.

We are living proof that you can have positive values as a business and achieve success.

And that is why Electrify owner, Lawrence Broadie, is preparing to take on - what is for him - the ultimate challenge: being quiet!

He has agreed to take part in Age Scotland's 'The Big Wheest' on Thursday, September 24 which involves him staying silent until he raises £1,000 and is allowed to speak again.

I decided to accept the challenge, and to support Age Scotland because I felt it was important

Lawrence, with support from the team at Electrify, has been tasked with raising £1,000 in silence, and the donations can only be made on the day.

Anyone who knows Lawrence will know that this will be difficult for him because he likes to talk!However, his other strong personality trait, determination, may save him on this occasion.

Lawrence said: "When it was suggested that I was a prime candidate to participate in Age Scotland's Big Wheesht, I wasn't sure whether I should be indignant about the suggestion that I talk too much or pleased that someone believed I could really be silent for up to 12 hours.

"I'm an optimist and I'm very determined, so I decided to accept the challenge, and to support Age Scotland because I felt it was important to take this on. I'm terrified though, at the same time. Talking is what I do for a living, so can I really conjure up £1,000 without the use of my words? I'm sure our fantastic team at Electrify will help as we work together to hit the target. I only hope they don't realise that the quicker we raise our target the sooner I'll be chewing their ear, again.

He added: "Age Scotland is a phenomenal charity. Those who know me, recognise the extent to which my maternal grandmother had a big influence upon my life. She's been gone a longtime, now, but I think of her a lot when I see the extraordinary work that the charity is doing to support those in later life.

"I hope this is the first of many charity challenges we take part in because it's the perfect way to live our values and support some fantastic causes."

To make the challenge a little more interesting Lawrence will be filmed live at intervals throughout the day performing 'tasks' which have been requested by members of the public,friends and family in exchange for donations. Suggestions so far include him lip syncing to a song of their choice, performing a dance move, or wearing an item of clothing they choose.

Age Scotland, the national charity for older people which tackles loneliness and isolation is recruiting business leaders and influencers in Scotland to 'haud their wheesht' and raise £1,000each, using only their networks, before being allowed to talk again.

Each £1,000 raised can enable Age Scotland to fund 200 calls on their free friendship line to people who are lonely and isolated and for whom companionship - and just someone to listen -is a potential lifesaver.

I hope this is the first of many charity challenges

Michelle Supple, Director of Charity Services at Age Scotland, said: "Imagine having no-one to talk to, day after day. Imagine how lonely you would feel. Sadly, 200,000 older people in Scotland go at least half a week without speaking to anyone.

"This has been an incredibly hard year for so many of us, but older people are among the hardest hit.

"While the rest of us take steps to return to some degree of normality, for the oldest and most vulnerable people this is still a long way off and is having a devastating impact on their mental health and well-being, exacerbating loneliness and isolation.

"We're thrilled that Lawrence and the rest of the team at Electrify are taking on this challenge to enable usto help even more vulnerable older people and we wish them lots of luck!"

PLEASE REMEMBER DONATIONS CAN ONLY BE MADE ON THE DAY WHEN THE CLOCK STARTS.