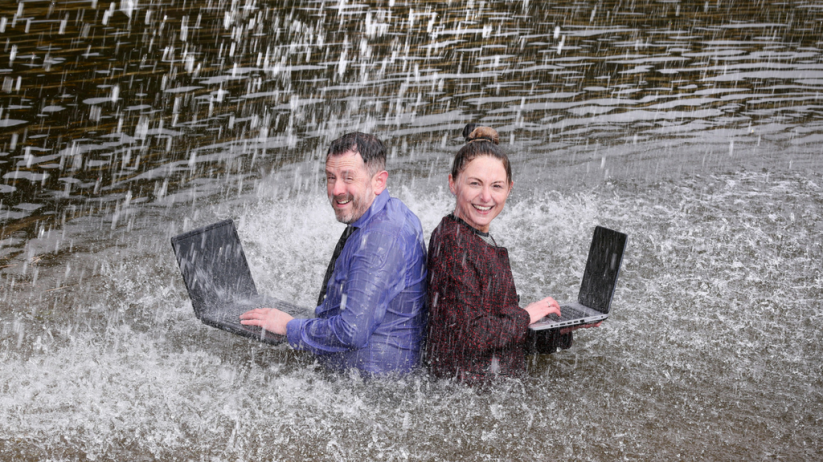 It has been a hugely busy period of late for the team at Electrify. As we head for the half-way point in the year we thought it might be useful to provide a catch up on what we've been up to over the last couple of months.

As busy as it has been, we've had a lot of fun along the way, working with clients who share our values, creating some fantastic campaigns.

With the SPFL Trust our focus has been on building up to the Golf Day 2018, which took place at The Carrick, last week.

This event takes place to help raise funds to work with the Chris Mitchell Foundation to deliver mental health first aid training to SPFL clubs, and other associated stakeholders.

Hibernian head coach Neil Lennon — who has spoken openly of his own challenges with mental ill-health — agreed to be our event ambassador, this year. He helped us promote the fundraiser in advance, and then again on the day. Doing so created a host of positive media coverage.

u25b6ufe0f WATCH | "We lost one, and one is too many," explains @HibsOfficial coach Neil Lennon as he explains how important the @SPFLTrust's partnership with @CMFoundation_ is for clubs. RT to share... pic.twitter.com/yTNwPzcpBS

We've also had a 4-4-2 Reading launch and the succesful SPFL Trust Annual All Club Conference, at which our director Lawrence Broadie spoke.

On top of that, we also launched the SPFL Trusts first Annual Report, which we wrote, edited, and designed, and the 2017 Festive Friends report, too!

With McEwan Fraser Legal, it's been out with the old and in with the new. A two-year main club sponsor partnership with Dundee United has been brought to an end, whilst we helped launch a new agreement with Ross County. Their all-new kits were revealed by Loch Ness along with our brand-new activation campaign: Biggest Team Picture.

The first 100 junior kits pre-ordered came with a golden ticket to participate in the McEwan Fraser Legal event which will see County put on their biggest ever official first team picture. All the players, coaching staff and a ton of kids! All tickets were gone in a little over 24 hours.

DPS Group has recently welcomed a new commercial director, and that freshness has meant building some significant marketing campaigns, using insight and creativity. We'll share more on that in the months ahead.

purpleTV kicked-off their latest documentary campaign, by revealing — on the tenth anniversary of his passing — that their next film will tell the story of the Celtic & Scotland great Tommy Burns. We were delighted to see so much positive coverage, especially at a time when there was (quite understandably) a great deal written and spoken about Tommy at such a milestone.

Staying in TV, and our work with BBC ALBA continues to excite. Whether it's been radioactive cats, Tartan Week in New York, hospital ships in Africa, or a hunky Clan Chief, we've been there all the way doing our bit to help promote some amazing TV content.

We're also working with MG ALBA on a range of strategic projects, which are focusing on futureproofing the organisation, as well as telling a whole new raft of important stories.

u25b6ufe0f TEAM OF THE DECADE | Here's your XV for our @GlasgowWarriors Team of the Decade, as we celebrate Ten Years on the Touchline. pic.twitter.com/TlxOvU6wod

With McCrea Financial Services we developed and helped to execute a Team of the Decade concept. The long-term Glasgow Warriors sponsor is celebrating Ten Years on the Touchline so we asked supporters to pick out the best XV from this period.

Working with our partners at QTV Sports, we developed a stunning visual campaign using film and graphics, in doing so encouraging hundreds of votes — and even more debate when the final XV was revealed!

We also took to the water to launch another year of Prime Four Beast Race, turning the sponsor's tagline, 'bring life to work' around, by bringing 'work to life' and sticking our models into Knockburn Loch for an official photoshoot.

Supporters Direct Scotland are also readying themselves to launch their new Scottish Football Supporter Survey for 2018. We're helping them make some significant changes for this year in terms of engagement and benchmarking. The survey is set for launch early in the new season.

At the beginning of the year we started work with K:A Leisure, North Ayrshire Council's leisure trust. The reveal on that project, which is about encouraging girls and women to participate in sport, is coming soon, so we'll tell you more when we can. We're also working with them on two other active projects, too!

We were delighted to work with The Action Group for the first time in the last couple of months. The charity helps children and adults with learning difficulties providing inspiring support right across the south east of Scotland.

Our work focused on a campaign called, Happy which saw us create three films for them to use at a range of internal events taking place in the coming months. These will eventually be revealed publicly.

To finish off this, we also launched a new website for Britain's brightest skier, Iain Innes, who is now British champion - and aiming for a shot at glory at the next Winter Olympics in 2022.

And that is just a little flavour of what we've been up to. It's been an incredibly busy, but fulfilling time.

We're continuing to talk with and welcome new clients, and so if you are looking with help to tell your story then get in touch with us.